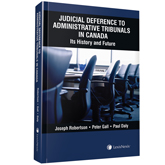 Judicial Deference to Administrative Tribunals in Canada: its History and Future

The Unity of Legitimate Expectations?

Last week I presented my paper “Administrative Law: a Values-Based Approach” at the inaugural Public Law Conference at the University of Cambridge. I hope to have a few posts on the conference, focusing on panels that I attended. But I will start with a post on my own paper. By way of general comment, I […] Read more

I posted recently about Canada’s new anti-spam law, mentioning the challenges that the CRTC would face in implementing it. The CRTC has established a complaints mechanism which can be accessed via its website.  Have a look here. It is proving popular: more than 1,000 complaints were received in the first week. By the end of […] Read more

Philip Hamburger‘s Is Administrative Law Unlawful? has been getting much attention in the blogosphere recently. Hamburger guest-blogged at the Volokh Conspiracy — and his series of posts laid out his position, an emphatic “Yes”, with admirable clarity — and his detractors (Adrian Vermeule, here and here) and supporters (Gary Lawson, Michael Ramsey) are now hammering […] Read more

Abstract:       Reasonableness has become the dominant standard of review of administrative action in Canada. Understanding what makes a decision unreasonable has become a critical issue for Canadian judges and jurists. The question I will address in this essay is: what does it mean to say that an interpretation of law is unreasonable?Recently, Canadian courts have […] Read more

There are shades of the Hart vs. Fuller debate in the disagreement between Scalia J. and Breyer J. in last week’s greenhouse gases case: UARG v. EPA. As part of a much wider debate about the relationship between law and morality, Hart and Fuller jousted over a rule prohibiting vehicles in the park. To simplify […] Read more

I spoke with Rob Breakenridge about Quebec’s “right to die” legislation and a timely Supreme Court of Canada case on prosecutorial discretion. Read more

Fall-Out from the Nadon decision