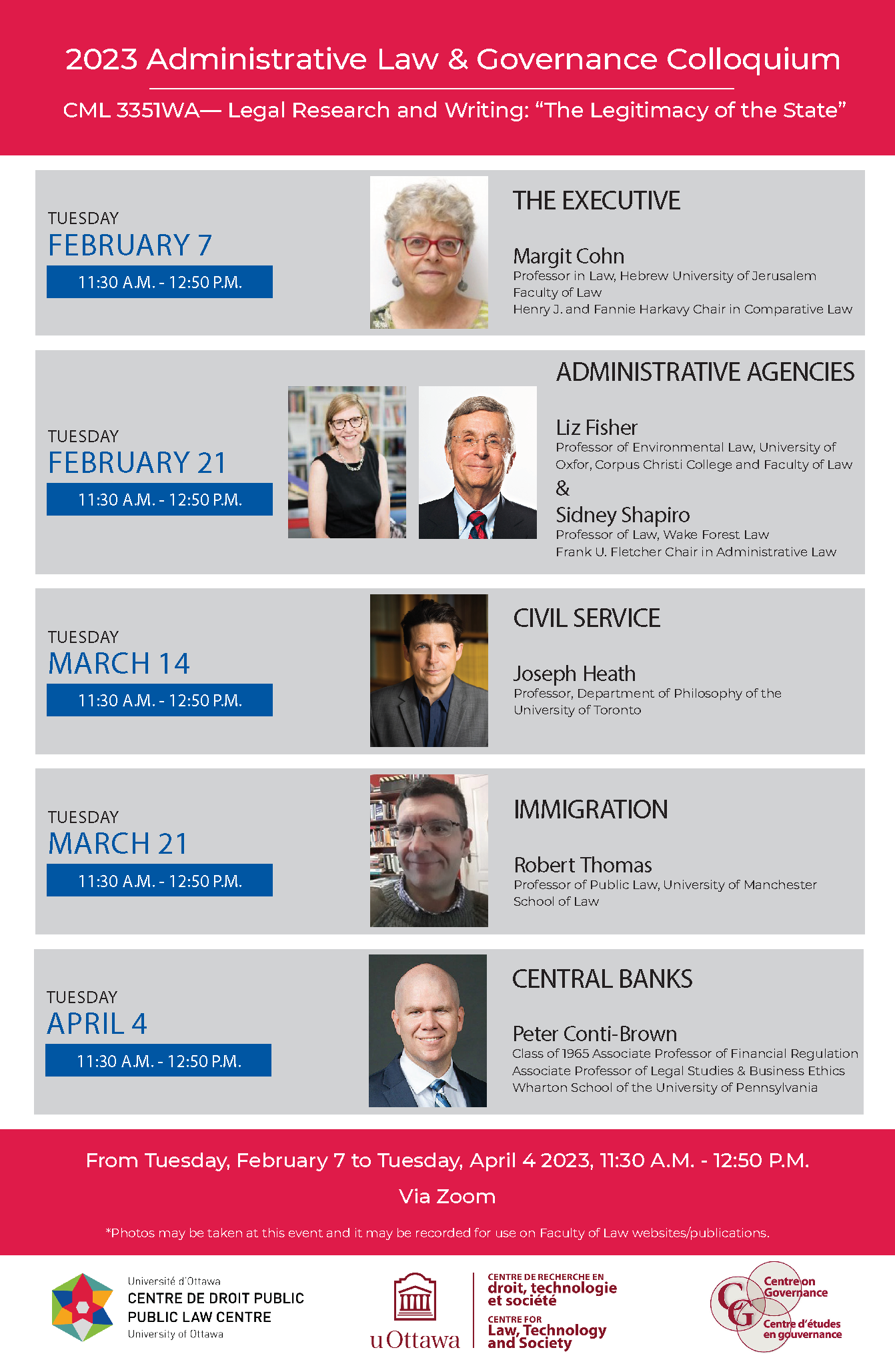 2023 Administrative Law & Governance Colloquium: “The Legitimacy of the State”

Registration for this year’s Administrative Law & Governance Colloquium is now open: register here. The topic for the 2023 edition will be “The Legitimacy of the State”: The legitimacy of contemporary liberal democratic states is in a state of flux. Managing the effects of globalization, responding to the COVID-19 pandemic and fighting escalating inflation have […] Read more

Is it Tenable? R (Friends of the Earth Ltd) v. Secretary of State for International Trade, [2023] EWCA Civ 14

From the Court of Appeal for England and Wales, here is an interesting recent judicial review decision about the effect of international agreements, and the role of the courts, in dualist legal systems: R. (Friends of the Earth) v. Secretary of State for International Trade, [2023] EWCA Civ 14. Here, Friends of the Earth sought […] Read more

The Prospects for Candour in Canada: The Importance of the “Record”

In an earlier post, I introduced the duty of candour in judicial review proceedings, which has been recognized by courts across the common law world. This is to be distinguished from those duties of candour that apply in national security proceedings, to regulated professionals and in private law settings. In this and subsequent posts I […] Read more

Reviewing the Lawfulness of the UK Government’s Section 35 Order

Yesterday, for the first time, the UK Government used s. 35 of the Scotland Act 1998 to prevent the Presiding Officer of the Scottish Parliament from presenting a Bill for Royal Assent. The Bill in question is the Gender Recognition (Reform) Bill, which makes it easier to obtain a Gender Recognition Certificate under Scots law, […] Read more

The New Zealand Supreme Court’s recent decision in Moncrief-Spittle v Regional Facilities Auckland Limited [2022] NZSC 138 contains an illuminating discussion of many important issues, including the obligation of public decision-makers to take human rights into account in their decision-making processes. The incident which gave rise to the underlying litigation was the cancellation of an […] Read more

Procedural Fairness in High-Volume Tribunals: How Not to Do It

Two recent examples, both from the landlord and tenant context, of how not to run a fair hearing. In Abara v. Hall and Lee, 2022 ONSC 7093, a landlord successfully obtained an order terminating a tenancy but received no compensation: the Landlord and Tenant Board found that the tenants had vacated the property and that […] Read more

An Introduction to the Duty of Candour

Defining the Duty of Candour The duty of candour requires parties to judicial review applications, especially government respondents, to “to make full and fair disclosure”.[1] They must “explain fully what has occurred and why”.[2] The duty has been recognized by the English courts[3] and by courts in other jurisdictions, such as New Zealand,[4] Ireland[5] and […] Read more

Probably the hottest topic in the world of Canadian regulation in recent months has been the proposed merger between two telecommunications behemoths, Rogers and Shaw, with the former essentially to absorb the latter. In extensive reasons published on New Year’s Eve, the Competition Tribunal found that the merger could go ahead: Canada (Commissioner of Competition) […] Read more