Regulating between the Lines: the Pensions Dispute in UK Universities

A remarkable feature of the strike action is that the familar public law norms of legality, rationality and procedural propriety have been conspicuous by their absence from the debate, even though the dispute has been taking place in a statutory framework. Indeed, the dispute is operating almost in a public law black hole.

The underlying dispute is about pensions. But there is a complex relationship between the parties to the dispute and other interested entities. First, there are university employees, academic staff who are members of the University and College Union. Second, there are individual universities — employers — represented by an umbrella group, Universities UK. Third, there is the pension fund, the Universities Superannuation Scheme. Employees and employers pay into the fund, out of which comes (for now) a defined benefit pension. The fund is managed by a trustee, advised by a negotiation committee peopled by employee and employer representatives. Fourth, there is the Pensions Regulator, a statutory body with responsibility for ensuring the health of UK pension schemes.

With low interest rates, the Scheme has a (notional) deficit. Two valuations of the Scheme were conducted in 2017, one of which was based on less pessimistic assumptions (the “September valuation”), one of which was based on more pessimistic assumptions (the “November valuation”). Applying those valuations created an enormous notional deficit, which required the abolition of defined benefit pensions altogether and their replacement by a defined contribution scheme. But the methodology used to calculate the deficit is hotly contested, because much turns on the level of risk deemed acceptable  — indeed, the resolution to the strike action was to create an independent panel to value the Scheme’s assets.

Who deems the risk to be acceptable? The Pensions Regulator plays an important role. But there is no public information about the Regulator’s views. Now, I know — or at least I think I know — that the Regulator’s position is that the Scheme is too risky at present. I only know this, though, because of conservations with people who have spoken to or seen correspondence from the Regulator. (In Quebec, one would say, “Daly a vu l’homme qui a vu l’ours”.) The Regulator has not taken a public position on the appropriate level of risk in the scheme, a hotly contested issue which has led to an unprecedented industrial action.

There are two aspects to explore here. First, from a public law perspective, the Regulator has not taken any “decision” that is reviewable. That is, one could not judicially review the Regulator, claiming that it has taken an irrational position on the valuation of the Scheme, that it has made an error of law, or that it has acted in a procedurally unfair manner. This is because the Regulator has an enforcement strategy which treats enforcement — taking reviewable decisions! — as a last resort. Enforcement comes only after the first two prongs of its strategy — enabling and educating — have failed to achieve the desired results. In this, the Regulator is not alone: British regulatory thinking has, for decades, focused on soft-law mechanisms of achieving regulatory objectives.  Cogent reasons have been advanced in favour of this approach. But it means that a great deal of regulation takes place in spaces that public law norms cannot reach. When the Regulator says “Jump! Or I will use my enforcement powers”, the regulated generally does well to jump, even if the instruction might turn out, when exposed to judicial scrutiny, to have been legally flawed, irrational or procedurally unfair. In short, the legal accountability of the Regulator is reduced because of the enforcement strategy the Regulator has adopted. 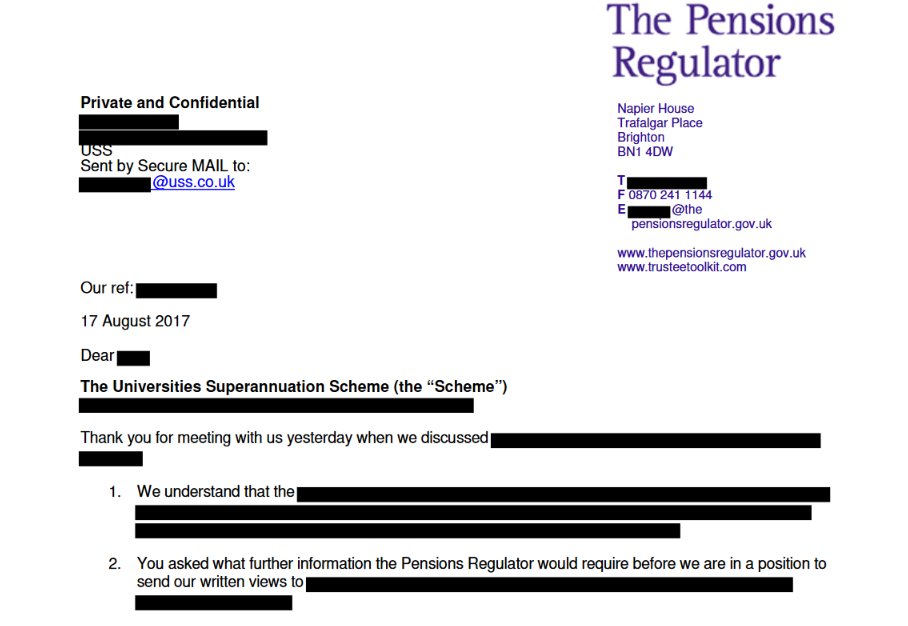 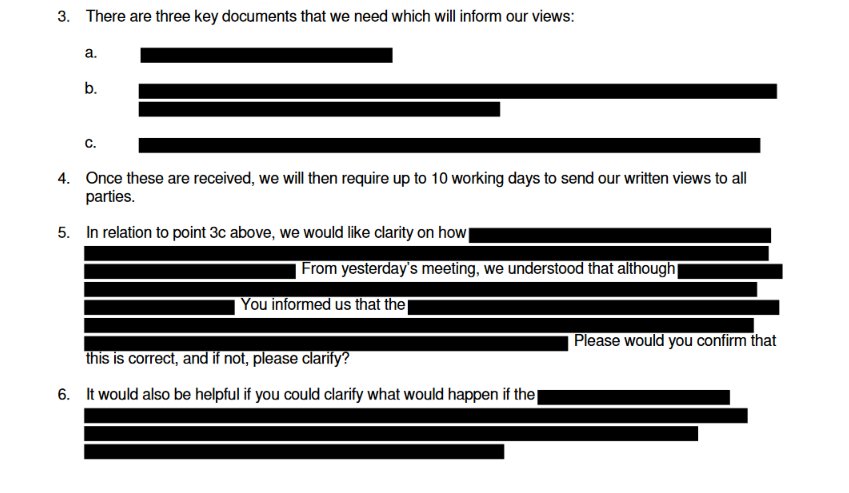 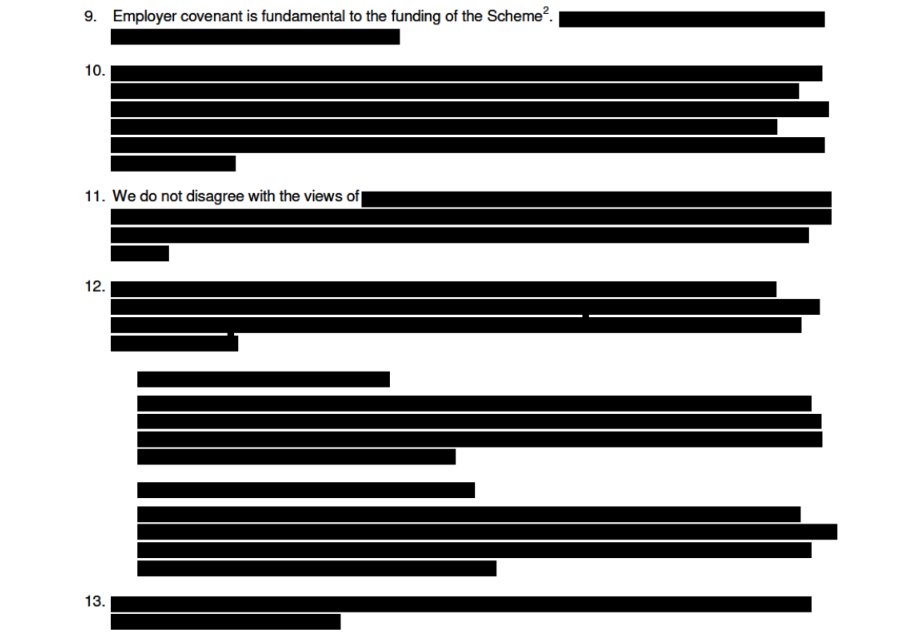 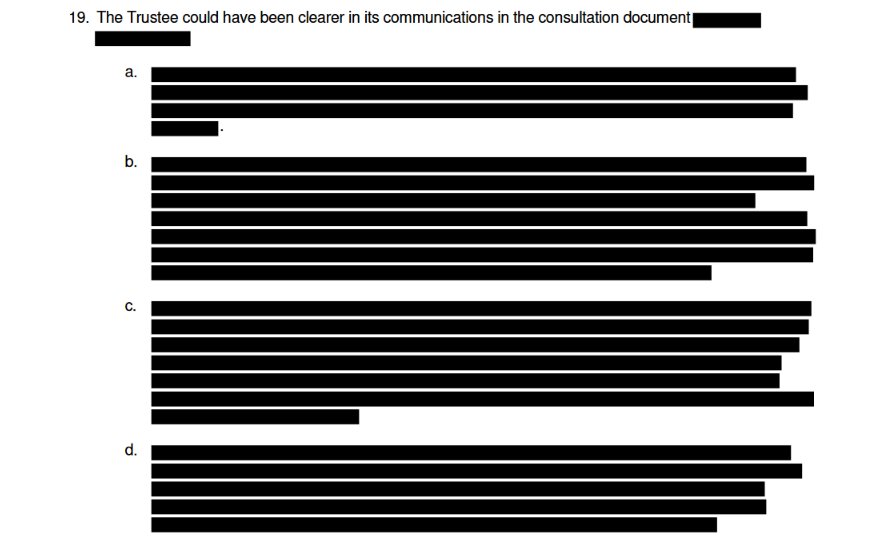 Why does the correspondence appear as it does? We can all understand the need for personal data to be redacted. Most of the redactions are justified by a non-disclosure provision in the Pensions Act 2004 (s. 82(4)), pursuant to which: “any information obtained by the Regulator in the exercise of its functions which relates to the business or other affairs of any person” may not be disclosed, by the Regulator or anyone in correspondence with the Regulator, except for information:

(a)which at the time of the disclosure is or has already been made available to the public from other sources, or

(b)which is in the form of a summary or collection of information so framed as not to enable information relating to any particular person to be ascertained from it.

Redactions in response to freedom of information requests are unsurprising. Here, however, the upshot is that positions of the Regulator — a statutory body — relating to critical decisions about the valuation of the assets of the Scheme — a fund in which dozens of statutory bodies (Universities) participate — are not made public, indeed cannot be made public. Those who have made me aware of the Regulator’s position, which has consequences for my pension entitlements, may have been acting illegally. To my mind, this is a remarkable result.

In consequence, the Regulator operates, at best, in the shadow of the law, untouched by obligations imposed by public law norms of legality, rationality and procedural propriety, with its decisions on matters of great public importance hidden from view. Given the resultant opacity, it is difficult to predict whether the proposed resolution to the strike action will achieve the desired result. The new panel will report, and the assumption is that the Regulator and the trustee of the Scheme will accept its recommendations, but we are unlikely to know the details of the Regulator’s response, or to be able to challenge it in open court.