I was in London today at a Chillin’ Competition event at the London School of Economics to mark the publication of The Shaping of EU Competition Law by Pablo Ibanez Colomo, where I commented on the administrative law matters raised by the book. As you will see, I think this is an important piece of research, which administrative lawyers would greatly benefit from reading.

The interesting thing about this book is that, despite the title, it is as much a book about administrative law as it is about EU competition law. For the focus is on the relationship between the EU Commission (an administrative agency) and the General Court and Court of Justice  (generalist courts):

Based on a unique and comprehensive database, The Shaping of EU Competition Law combines qualitative and quantitative approaches to shed light on the evolution of EU competition law. It brings a new perspective to some of the most topical issues in the field including due process and the intensity of judicial review. The author’s main purpose is to examine how the institutional structure influences the substance of EU competition law provisions. He seeks to identify patterns in the behaviour of the European Commission and the EU Courts and how they interact with each other. In particular, his analysis considers how the European Commission reacts to the case law and whether, and in what instances, the EU courts defer to the analysis of the administrative authority. The analysis is supported by the database and an unprecedented array of statistics and figures free to view online.

Ibanez Colomo canvasses three substantive areas of EU Competition law — the definition of restriction of competition; the concept of abuse of a dominant position; and the test applied in the control of mergers — the evolution of which has been influenced by the institutional relationship between the Commission and the courts. Economists also figure heavily in this text, for many of the central concepts of EU Competition law are influenced by economic models which seek to predict the consequences of different types of action taken by market actors.

Three aspects of Ibanez Colomo’s account are of interest to administrative lawyers.

First, and most importantly, the methodological approach taken to assessing how much deference is being paid to the Commission by the courts.  Empirical analysis has proven difficult in the area of administrative law. There are intractable methodological issues. It is difficult to assess deference by establishing the rate at which administrative decisions are invalidated, not least because the cases that make it to court and final decision are a small (and in many ways unrepresentative) sample of all administrative decisions; it is naive to think that outcomes are determinative when the way in which a conclusion is reached might actually vindicate or cast doubt on a position taken by an administrative agency; and it is foolish to rely on how much deference judges say they are according, because the intensity of review engaged in by judges might not match their rhetoric. Moreover, measuring the effects of the decisions of courts on the behaviour of administrative agencies is far from straightforward, because agency action is motivated by many factors, not simply settled legal doctrine and the anticipated reaction of the courts to deviations from that doctrine.

Ibanez Colomo’s response is to develop “operational benchmarks” in his three areas of inquiry. These benchmarks, drawn from Treaty provisions and judicial decsions (and heavily influenced by a series of analytical distinctions between, for example, rules and standards), serve to illustrate the policy space that the Commission develops over time, or, in Ibanaez Colomo’s terms, the “resilience” of particular interpretations of Treaty provisions. To put the point another way, the Commission’s ability to deviate from the operational benchmarks defines the degree of deference it has been accorded.

In addition, although Ibanez Colomo has mastered such a wealth of data that his approach can fairly be described as quantitative, it equally has important qualitative aspects. Not only has he counted cases, he has also read them. He can therefore point to cases where the result went against the Commission but the analysis nonetheless vindicated its position. This allows Ibanaz Colomo to track the substantive evolution of the law over time and accurately measure deviations from his operational benchmarks. He also draws a distinction between the endogenous constraints and exogenous constraints on the Commission, endogenous constraints imposed by virtue of the framework of EU law and exogenus constraints resulting from professional consensus about economic analysis.

This approach could very usefully be applied to other areas of administrative law, most usefully I suspect to administrative agencies which are institutionally and substantively similar to the Commission. That is, those agencies which — telecommunications and utilities regulators spring to mind — combine investigative and enforcement functions and have a broad policy-development mandate. Analysis of administrative tribunals, which must faithfully apply existing law and exercise solely adjudicative functions might prove less compelling. There are also some administrative agencies, such as government departments, which are not constrained by endogenous factors in the same way as the Commission. When faced with a judicial decision unfavourable to one of its policy decisions, the United Kingdom’s Home Office, to take one example, would be better advised to convince the Home Secretary to lay a change to the Immigration Rules before Parliament than to attempt to increase the policy space by persuading a court to allow it to deviate from the operational benchmark.

Second, the conclusions on deviation from the operational benchmarks are interesting. Some areas of EU Competition law are more resilient than others, where there has been a notable degree of inconsistency in the approach taken to important issues of substantive law. A cynic would say that the Commission has exploited the policy space made available to it, at the expense of consistency. Ibanez Colomo builds on his conclusions to cast doubt on doctrinal or principled arguments for deference to administrative agencies:

One lesson to be drawn from this study is that any debate about whether administrative agencies should be given deference by review courts seems incomplete if dynamic considerations, on the one hand, and the incentives of authorities, on the other, are ignored. Put differently, arguments in favour of deference cannot disregard the fact that administrative authorities act strategically and adapt to the behaviour of review courts. Thus, the question of whether it is appropriate to defer to the reasonable interpretation of an authority cannot be examined as a one-shot game, thereby ignoring the interaction with the review courts and the legal uncertainty that may result from the introduction of inconsistencies in the system. This monograph suggests that approaches to the question that one may label as primarily doctrinal or principled can be expected to lose their influence over time insofar as they lack explanatory power.

I am listed as one of the accused! I think, however, that the monograph tends to underscore the explanatory power of my argument for deference to expert administrative bodies (in appropriate circumstances), even though I did not explicitly present the argument in such terms. One of Ibanez Colomo’s conclusions is that exogenous constraints, in the form of mainstream consensus in the economics profession, have influenced change in substantive EU Competition law over time. This is exactly what a proponent of deference would hope! Deference is designed to open a policy space for administrative agencies. Rather than being hemmed in by the principles of statutory interpretation and thus forced to ape lawyerly ways of thinking, in a deferential regime agencies can instead develop their policy objectives over time, inspired by ideas generated by experts in the area regulated by the agency. I see the importance of exogenous constraints in EU Competition law as a vindication of deference (though here the picture is complicated by the influence economic thinking has had directly on the courts, not just the Commission).

Beyond this, I think most proponents of deference do think in terms not just of one-shot interactions but in terms of repeated interactions between administrative agencies and courts. It is important to highlight that the policy space created by deference to administrative agencies is not a vide juridique. When administrative agencies choose between different options within their policy space, they must act in a procedurally fair manner and demonstrate that their choices are justified, transparent and intelligible. Consistency is an important legal value, because it allows individuals and firms to plan their affairs, but so too is flexibility, because it allows administrative agencies to change their policies in response to changing circumstances and, perhaps, shifts in the consensus view developed by relevant experts. Accordingly, changes in an agency’s position have to be defended in terms satisfactory to a reviewing court. The fact that there have been variations over time in the size of the policy space in EU competition law and significant changes of position by the Commission within that space prove nothing on their own. To demonstrate that deference has been damaging, it would be necessary to engage in a qualitative analysis of how well or badly the Commission’s changes of position were defended.

Equally, appreciating institutional structure can help administrative lawyers to better understand the evolution of the substantive law. I have written, for instance, on the tension between the Supreme Court of Canada’s rhetorical and doctrinal (most of the time…) commitment to deferential judicial review and its institutional role as the apex court in the Canadian legal system, which brings with it the expectation that the Court will set out authoritative definitions of the general law of land. Alternatively, appreciating institutional structure might expose differences between the practice of administrative law at different levels of the judicial hierarchy: as Sarah Nason observes in her excellent recent book Reconstructing Judicial Review, first-instance administrative law decisions generally turn on a close appreciation of the context of individual cases and statutory provisions which are much more concrete than the abstract frameworks developed by the United Kingdom Supreme Court.

In sum, this book — ostensibly about substantive EU Competition law — is in reality a book from which administrative lawyers will learn a great deal about their discipline. 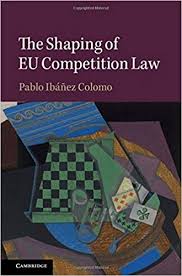