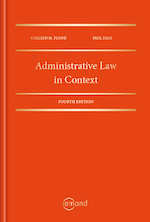 This Chapter sets out the new administrative law framework the Supreme Court of Canada established in Vavilov. The decision in Vavilov was the ‘big bang’ of Canadian administrative law: from now on, every issue must be analyzed with Vavilov as the starting point, with prior jurisprudence playing a supporting role only to the extent it can fit within the Vavilov framework.

There are two main components to the Vavilov framework: the reasonableness standard; and the rules for selecting the standard of review. Before Vavilov, there was Dunsmuir v. New Brunswick. Designed to simply synthesize the Supreme Court’s context-sensitive application of the so-called ‘pragmatic and functional analysis’, Dunsmuir soon hardened into a set of categories of decision to which correctness and reasonableness would apply before, eventually, becoming a virtually irrebuttable presumption of reasonableness review. With the presumption of reasonableness review difficult to escape, defining “reasonableness” became ever-more important; the two paragraphs devoted to the task in Dunsmuir were inadequate.

The last issue addressed in this Chapter is remedial discretion, a subsidiary part of the Vavilov framework but one which, nonetheless, is likely to be significant in many cases. Scattered through this Chapter are some ‘deep dives’ into cases which reveal significant features of Vavilovian administrative law.