Administrative Independence: the Importance of Security of Tenure 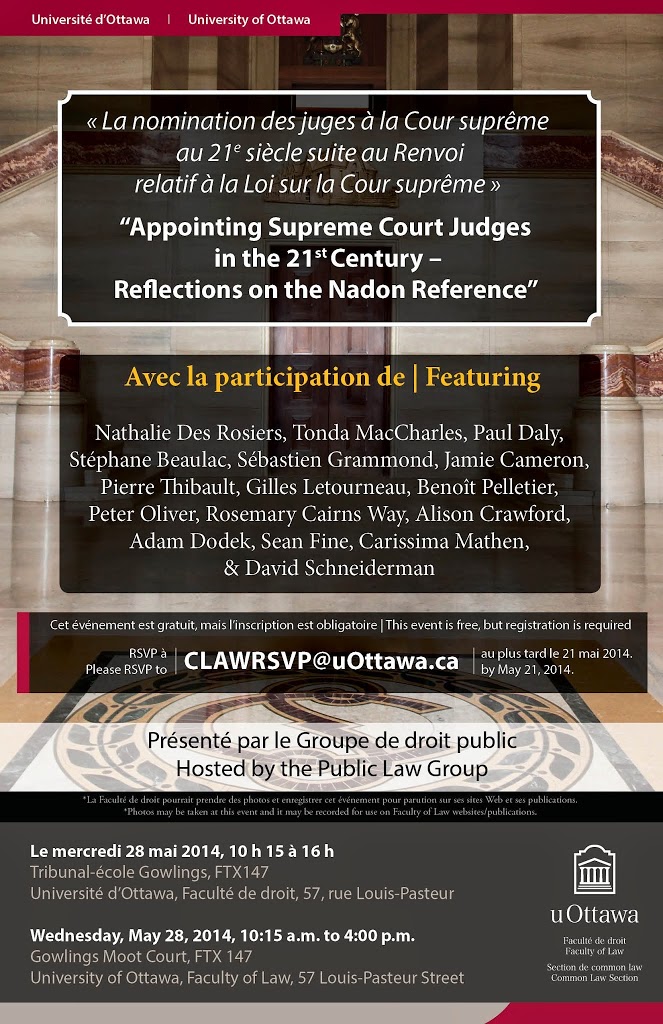 Register Now for the Nadon Reference Symposium on May 28

Here is a radical suggestion from a 1997 essay by Peter Cane: “public law claimants should be free to specify the result they want to achieve by their claim and ask the court to provide an appropriate remedy”. The suggestion seems radical because courts sometimes tend to treat public law remedies as rather inflexible. Things […] Read more

Hot off the press: the Law Society of Upper Canada (Ontario’s legal regulator) has rejected Trinity Western University’s application to be an accredited law school. TWU is a private, Christian law school located in British Columbia. Students must sign a ‘Community Covenant’ which requires them to make various commitments. As Jeremy Webber has explained: It […] Read more

A tragic accident occurred in Seaworld, Orlando in 2010. A trainer interacting with Tilikum, a killer whale, was dragged underwater and killed. An investigation by the Occupational Health and Safety Authority ensued. Seaworld was found to have violated the duty to provide a safe workplace and lost its challenge to the order made pursuant to […] Read more

Symposium on the Nadon Reference: May 28, University of Ottawa

I have been organizing this event with Carissima Mathen from Ottawa. We have a stellar line-up of guests to analyze the decision and its consequences. I look forward to seeing you there! Read more

A New Blog on Administrative Justice

I previously mentioned Unjust by Design, an excellent book on administrative justice by Ron Ellis. The book was recently shortlisted for the prestigious Donner Prize. Ron now has a website and blog, Administrative Justice Reform, on which he discusses various aspects of administrative justice. His recent series of posts on the restructuring of federal tribunals […] Read more

Sunstein on Breyer on Reasoned Decision-making

Cass Sunstein has a nice short essay on Justice Breyer in a forthcoming issue of the Harvard Law Review, “From Technocrat to Democrat“: There is an epistemic argument for judicial deference to the decisions of administrative agencies and legislatures: courts do not have easy access to relevant information, and they should defer to those who […] Read more

Martin v. Alberta (Workers’ Compensation Board), 2014 SCC 25 does little or nothing in the way of doctrinal development, and so should not be expected to have a lasting impact on the law. Three aspects of this Supreme Court of Canada decision are nonetheless worth highlighting in an effort to explain why Martin is best […] Read more